The computer scientist Egbert van Zwan photographed because he needed work for his scientific research in the field of image recognition. When it appeared that the computer models he developed did not function the way he envisioned, he gave up his scientific project as well as his photographic efforts.

The computer scientist Egbert van Zwan developed an interest in photography during his doctoral research at the Radboud University in Nijmegen. Working with a self-made computer model, he wanted to make a contribution to photographic interpretation and criticism. His aim was to prove that it would be possible, given an arbitrary photograph, to say something about its maker and intention with mathematical certainty. This research touches on fundamental issues of interest in photography related to the question of whether or not the personal intention of the photographer can be communicated by the photographs themselves. The sceptic might argue that, due to the mechanical nature of photography and the automatic relationship that exists between the object in reality and in the picture, it is not possible to communicate a personal intention with respect to that object. In contrast, Van Zwan believed that the choice of subject matter, the framing of the image, its composition and the moment of photographing are intentional acts that do communicate something about the character and intent of the photographer. He imagined a program that would analyse scanned photographs and based on the results, would generate a psychological profile of the photographer and an interpretation of his intentions. As a test for this program, he would require a statistically significant quantity of work from a photographer, one who takes pictures with many random elements in the image. To this end he started his own photographic career. He took pictures in busy places, particularly in shopping area’s and developed a special interest for real and fake elements in his pictures because he was interested how his program would react to these situations. He often photographed advertisement posters or situations with real people and dummies and liked to photograph shadows and reflections. Sometimes he shot his images from the hip.
All of his pictures, independently of their quality, were scanned and analysed with his computer program. Initial results were encouraging. After processing hundreds of photographs, a profile was created in which Van Zwan recognized himself. Moreover, the program generated, for each individual picture, an output containing a striking observation about the photographer, which at first sight appeared to be non-trivial. Closer examination, however, showed that the results were not entirely consistent. This was especially evident with very similar photos which were taken in rapid succession, where the ‘comments’ sometimes differed widely from each other. To eliminate these imperfections, Van Zwan adjusted his program at various points. One of the first improvements was the addition of a self-developing component, a feature identification element based on evolutionary strategies. He appeared to be moving in the right direction, nevertheless some anomalies in the results remained. To remedy these, he integrated an autoregressive form model and para-perspective imaging. After numerous refinements and as many less than satisfactory results, it became clear to Van Zwan that, even with such an advanced mathematical method, the accuracy he desired could not be achieved. He realized that the time was not yet ripe for his project. Not because the goal he had set for himself, i.e. to say something meaningful about the photographer and his intentions with an arbitrary photograph, was based on a wrong hypothesis, but because mathematical and psychological knowledge was not yet rich enough for such a model.
This realization led to his complete collapse and made him withdraw from public life for years. He gave up science and photography and never finished his Ph.D. research, which, apart from a few formalities, had been completed. Recently, he took a job as a librarian. I bought his entire photo collection and have made a selection therefrom. 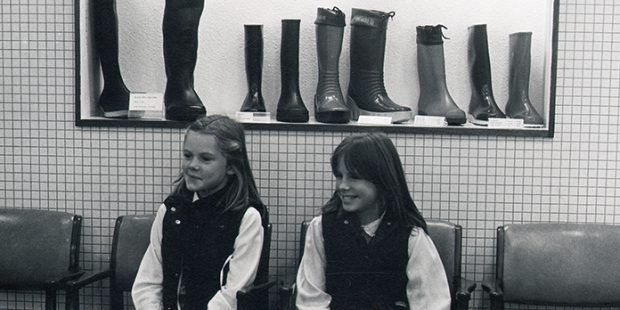