Van Gogh’s influence on modern culture is stronger than ever and it is hard to overestimate his reputation. Nevertheless, an in-depth investigation of a newly discovered manuscript suggests that his influence goes much further than has been imagined up until now. This so-called Engelen-manuscript by an unknown biologist from Van Gogh’s hometown has the potential to send shockwaves through the art world with the proof that Van Gogh’s genius was so powerful that it is/was not constrained to temporal constants and influenced at least one other person who preceded Van Gogh by several years.

In March 2014, in the Regional Archives of West-Brabant, I discovered an insignificant folder with notes, sketches and some salt prints (early photos). The pieces in this manuscript were made in the 1840s by the forester/sunflower horticulturist/amateur biologist Henricus Engelen (1783-1847). At present, little is known about this solitary but sagacious figure and research into his life and works is beginning in earnest. Just like Van Gogh, he was born in Zundert, but unlike him, he stayed there all of his life. For somebody living that far away from the scientific community, his open-minded approach to entirely new subjects of study is remarkable and he was a pioneer in fields such as sunflower-genetics and early photography.

A quick look at some of the drawings and photos from the discovered manuscript makes it immediately clear that Engelen, who died six years before Van Gogh was born, was somehow affected by him nonetheless. In both composition and style, as well as in choice of subject matter, Van Gogh’s influence is undeniably brought to bear on the works of Engelen.

On the left a drawing from the Engelen-Manuscript signed and dated by Engelen November 6, 1844, on the right a famous sunflower painting by Van Gogh, 1887.

On the left a salt print by Henricus Engelen from 1844 or 1845, on the right another sunflower painting by Van Gogh from 1887.

Of course, it has not escaped our attention that, at first glance, this seems a rather bold assertion. In fact, the notion of time-traveling artistic influence seems highly unlikely, but it is not without precedent. Upon closer examination of this case, it appears to be an excellent example of an ‘untimely collaboration’, a term coined by the artist-philosopher Jalal Toufic. In his theory, great geniuses produce works that exert spheres of influence outside of the unilateral flow of chronological time. The aura of their work has such a large impact that it expands in all the ‘time-directions’, like the ripples caused by a stone thrown into the calm surface of a pond. It comes as no surprise that the work of Van Gogh, given its unrivalled acclaim, caused/s such an auratic effect.

During the past year, I have made an in-depth study of the Engelen-Manuscript and came to the following conclusions:

1. The manuscript is authentic *
2. It is very unlikely that Van Gogh knew the work of Engelen **
3. The influence of Van Gogh manifested itself even before he was born ***

* The manuscript was found decades ago in the attic of the so-called ‘Forester’s House’ on the Oude Buisse Heide near Zundert. Together with many other pieces from the tenement, which has been housing local foresters since its construction in 1750, it was transferred to the Regional Archives of West-Brabant. It was in the archives that it was discovered by me. Radiocarbon dating of the paper around 1840 is in agreement with all the available data. The manuscript is signed in a few places by Henricus Engelen, who actually lived in the Forester’s House from 1805 until his death in 1847.
** Henricus Engelen had no children through whom Van Gogh might have visited the Forester’s House, located some kilometres from his own place in Zundert. It is unlikely that the Engelen-Manuscript has ever left the house, therefore it can be safely assumed that Van Gogh never saw it. Even in the case he would have seen it, it is not credible that many years later he would have been able to make such similar work. Moreover, copying behaviour does not seem to be in accordance with his character.
*** The only logical and reasonable deduction from the first two conclusions must be that Van Gogh’s influence has been asserted against the forward direction of time. From a stylistical point of view, there is too much similarity between the work of Engelen and Van Gogh to have been made independently. It is likely that the enthusiasm of Engelen for sunflowers has also been conveyed by Van Gogh through their untimely collaboration. Furthermore, can it the coincidence that the older brother of Van Gogh, also named Vincent, is buried directly besides Engelen (see photo) at the Zundert Protestant Churchyard? 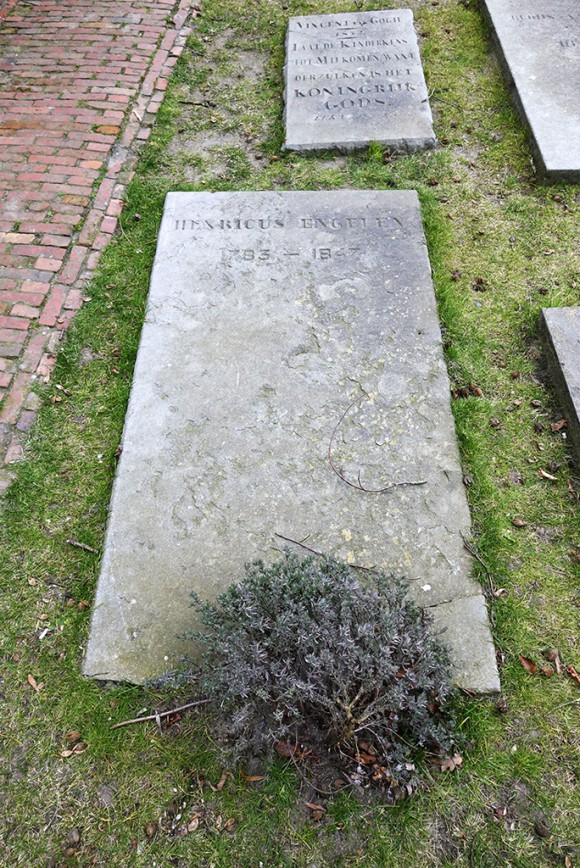